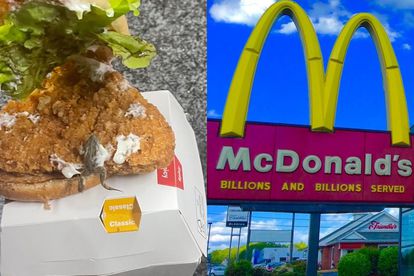 The amphibian ambush is being treated with the utmost seriousness by McDonald’s investigators. Photos: Facebook/Willem Bezuidenhout and Flickr

The amphibian ambush is being treated with the utmost seriousness by McDonald’s investigators. Photos: Facebook/Willem Bezuidenhout and Flickr

When they say frog tastes like chicken, I don’t think a Mpumalanga family were willing to test that theory after their daughter was served a chicken burger by McDonald’s with a slimy surprise. The fast-food chain says investigations are underway.

A NOT SO HAPPY MEAL

Willem Bezuidenhout and his family thought it would be a good idea to have a family meal from the McDonald’s branch in Secunda, Mpumalanga. Unfortunately for them, they got more than they paid for when they found a frog in a McChicken burger.

He took to Facebook to lament the fact that his daughter, who was a few bites into the burger, almost ate a dead green frog hanging onto the burger by some sauce.

McDonald’s Daniel Padiachy, who is the head of marketing, communications, IT and supply chain, says serving fresh and safe food is paramount to them.

Padiachy says the matter is receiving serious attention and the Secunda McDonald’s branch is under investigation.

Phumeh Buthelezi, one of the many to comment on Bezuidenhout’s post, says McDonald’s is off the menu going forward

Another person from the comments section, Kelly Kellerman, joked that McDonald’s was testing a new French-inspired burger on their menu

“This is from the French came to work here. Good advertising new kind of burger on the menu.”

A Twitter user, who goes by Chef Mona-Lisa, says she had experience with frogs in food. She had to undergo a lie detector test and still believes her frog hitched a ride on the lettuce.

Meanwhile, another Twitter user chastised McDonald’s for the frog and conveyed his waning trust in the franchise.

ALSO READ: Chicken with a hint of frog: Couple get slimy surprise in McDonald’s burger