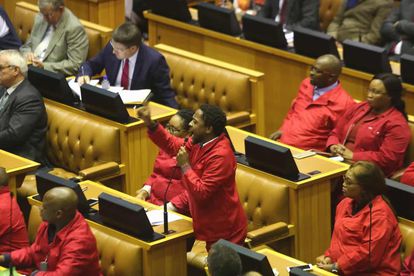 Mbuyiseni Ndlozi came close to causing a scene of utter chaos on Tuesday, as the outspoken EFF member continued his tour of division across South Africa. After Tweeting his dislike for the World-Cup winning Springboks team, he echoed those calls on eNCA before rocking up to Parliament this afternoon.

Giving his speech just metres away from the DA – who had all wore their Springboks jerseys to the session – Ndlozi continued to rally against a narrative of “false unity”. He was utterly scathing in his criticism of what the team represents, comparing them to colonial symbols like Die Stem and the apartheid flag.

In fact, Mbuyiseni Ndlozi labelled the week-long celebrations in the country as “fake”, acting as a tool for “white supremacy”. For those South Africans wanting the EFF spokesperson to change the record, we couldn’t disappoint you anymore. Ndlozi also bemoaned the inclusion of Eben Etzebeth in the squad – the lock is facing charges of hate speech and assault from the SA Human Rights Commission.

Much like Cheslin Kolbe and the English back-line, Mbuyiseni Ndlozi was allowed to continue unchecked, making his six-minute speech a vitriolic tirade which drew boos and heckles throughout. The speaker played advantage, and the vociferous Red Beret took it with aplomb.

It was tense, awkward, and passionate in the extreme:

“We call on black people to refuse the emotional abuse we are subjected to. This parade is an abuse of people who gave too many cheeks to racism. There will be no racial unity until the land comes back, or until the wealth in this country is shared between all of the people who live in it. We must see a black-majority Springboks team rise, to reflect the country.”

“When you are done celebrating this, go and sing Die Stem. Go and fly the apartheid flag. But do not include us. We are the generation that is refusing abuse, and we will say without doubt or any apology, Die Bokke must fall. It is a white supremacist sign that belongs in the dustbin of history.”

Mbuyiseni Ndlozi on the “fake unity” of the Springboks