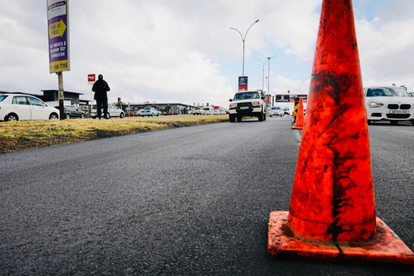 Transport minister Fikile Mbalula descended on the Noth West province, or at least the pothole-riddled N12 national road, to inspect the work to restore it.

Locals have dubbed the route stretching from Wolmaransstad, Klerksdorp and Potchefstroom as the “death trap”.

Before the visit on Thursday, Mbalula had inspected the road in March during a Presidential Imbizo in Mahikeng. Led by President Cyril Ramaphosa, the Imbizo saw communities engaging the government on important service delivery issues in the province.

Road users lamented the condition of the road, which links several provinces – Northern Cape, North West, Gauteng and Western Cape. But Mbalula attempted to ease nerves by saying his department had pledged R45 million to maintain the major road.

More than two months after that visit, Mbalula expressed that he was happy with the progress made by Sanral, the national roads agency. Previously, the provincial government undertook the project before the transport department shifted the responsibility to Sanral.

Joburg potholes: Over 100k fixed but what now?

Private sector involvement in the pothole crisis that has plagued one of the biggest cities on the continent is a no-brainer, with insurers forking out large amounts to deal with tyre claims.

Enter the Pothole Patrol project, launched in May 2021, it has seen the City of Joburg (CoJ) partner with Discovery Insure and Dialdirect Insurance.

In the one year since its launch, the project has repaired 100 000 individual potholes in Johannesburg. And according to the patrol, those are all new repairs.

Things are working so well that Discovery Insure reportedly noted a 26 per cent reduction in pothole-related claims in Johannesburg. At the same time, the rest of Gauteng has seen a claim increase of 45 per cent.