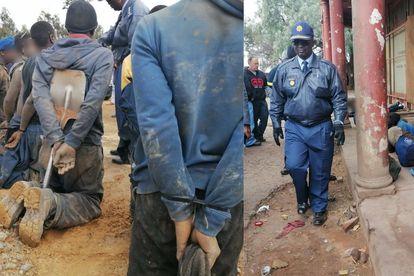 In an ongoing efforts to curtail illegal mining in the province, the Gauteng Provincial Commissioner, Lieutenant General Elias Mawela roped in more forces to deal with illegal miners.

This operation was carried out simultaneously on eight (8) premises in Krugersdorp and Randfontein.

“A total of forty-six (46) suspects were arrested and one fatally wounded. The suspects include foreign nationals from neighbouring countries and their status in the country is now a subject of an ongoing investigation,” said police spokesperson Philani Nkwalase.

He added that the suspects are expected to appear in court soon to face the charges that include contravention of Precious Metals Act 37 of 2005, Mining Health and Safety Act 29 of 1996, theft, Mineral and Petroleum Recourses Development Act 28 of 2002 and possibly Immigrations Act 13 of 2002.

This follows the recent repeated rape of eight models who were shooting a music video at West Village in Krugersdorp by men who were wearing blankets.

Old mine dumps on the West Rand are notorious for housing infamous Zama-Zama gangs who occupy these dangerous sites in search for gold.