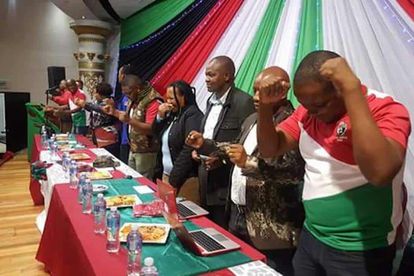 SADTU issued a statement expressing its concerns about the state of affairs in the Estcourt Marking Centre under Uthukela District where one of the markers died of COVID-19. Photo: Twitter@_cosatu

SADTU issued a statement expressing its concerns about the state of affairs in the Estcourt Marking Centre under Uthukela District where one of the markers died of COVID-19. Photo: Twitter@_cosatu

Following the death of one marker, the KwaZulu-Natal branch of the South African Democratic Teachers Union (SADTU) called for a stoppage of matric marking, to allow rapid testing at Estcourt in KwaZulu-Natal, a marking centre the union has described as one of the highly compromised.

KZN Provincial Secretary Nomarashiya Caluza said that SADTU is calling on the department to subject all markers to a rapid testing which must cover all markers. “For this to happen, we have advised that marking must stop at 13:00 today, Sunday 10 January 2021 so that rapid testing of all markers can take place.

CALLS FOR RAPID TESTING AFTER DEATH OF MATRIC MARKER

“Furthermore, deep cleaning of the Centre must also take place today. We are aware that the Department wants to postpone all this to Monday. We want to remind the Department that it is all about saving lives and they must prioritise that in order to avoid further spread of the virus.” The statement read,” Caluza said.

On Saturday 9 January 2021, the Union had issued a statement expressing its concerns about the state of affairs in the Estcourt Marking Centre under Uthukela District where one of the markers died of COVID-19.

“SADTU monitors have been visiting centres and in some centres compliance is highly compromised. Markers were found chatting in large groups. The Department had told us that there is a compliance officer in each centre and we call upon these officers to take full responsibility for compliance-related matters in their centres.

ALLEGATIONS THAT MATRIC MARKERS ARE NOT COMPLYING

“There have also been allegations that markers did not apply for accommodation in marking centres such as Glencoe, Siyamukela, Estcourt, and others and we have been told that this has been happening for years. Before there was always enough space to accommodate them. Unfortunately, that is no longer the case as all marking centres must take 50% of their capacity.”

In an interview with the SABC earlier this week, MEC Kwazi Mshengu said marking is well underway.

“We have recruited 8 730 markers and of that number only 102 have withdrawn for various reasons. Others have tested positive, others are in quarantine, isolation, others indicated they fear for their lives and unfortunately others have succumbed to COVID-19.

“One of the areas of concern is the continued increasing number of fatalities as a result of COVID-19 in the province, we have lost about 106 educators and 51 of those deaths were in December only, which shows really that the second wave is hitting us hard,” said Mshengu.