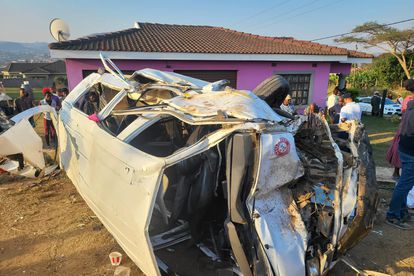 Three learners were killed in a horrific taxi crash in Inanda. Image: RUSA.

Three learners were killed in a horrific taxi crash in Inanda. Image: RUSA.

Three primary school learners were killed and thirteen other people were seriously injured after the brakes on a mini bus taxi failed before it ploughed into pedestrians in Inanda, KwaZulu-Natal (KZN) on Thursday.

According to private security, Reaction Unit South Africa (RUSA), they received a call for assistance from a frantic female at approximately 15:28.

The woman informed them that she was a passenger in the taxi that overturned after it struck five pedestrians.

The only information she could provide regarding the location of the accident was that it was in the vicinity of a Nazareth Baptist  Church near Inanda Dam. She was severely injured and could not provide a pin drop to the location.

Reaction Officers and RUSA Medics were dispatched in the direction of the Inanda Dam while the controller on duty made several calls to emergency services and obtained a location in Matabetule – Inanda. The information was forwarded to First Responders.

Balram said three primary school learners were fatally injured. One of the deceased was trapped under the wreckage of the overturned white Toyota Hiace.

“Firefighters utilised a high pressure lifting bag to elevate the taxi and remove the body of the child.

“According to witnesses, the taxi was travelling down a steep road when its brakes failed. The driver veered into an unpaved road when he struck five primary school learners who were returning home. The mini bus then crashed into a boundary wall before it overturned resulting in the passengers’ injuries.”

The injured were transported to hospital by various ambulances.