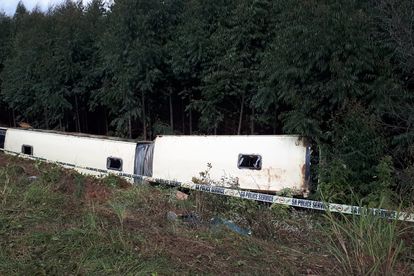 A total of 127 teenagers were injured in a concertina-bus rollover on the R40 between White River and Hazyview near the Klipkopje dam on Friday morning.

THREE PATIENT STATIONS TO DEAL WITH THE MASS CASUALTY

According to ER24 spokesperson, Ross Campbell, paramedics arrived on the scene at around 10:10.

“ER24 paramedics were on the scene at around 10:10 am along with the Fire and Traffic Departments as well as multiple other services from the area.

“The bus had rolled down an embankment and up against a plantation of trees after the driver had allegedly lost control of it on the R40.”

THE BUS HAD ROLLED DOWN AN EMBANKMENT

Campbell said 127 male and female teenagers between the ages of 16 and 19 were found to have suffered minor to moderate injuries.

“All had luckily managed to self-extricate themselves from the bus. Three patient stations were set up to deal with the injured, with ER24 taking the lead.

“Many services chipped in to help, including towing.”

THE CAUSE OF ACCIDENT WILL BE INVESTIGATED

He said patients were treated and transported to multiple hospitals in the area for further care. There were also many bystanders and concerned parents on the scene.

The exact cause of the incident is unknown to ER24, however, the South African Police Services were also on the scene for further investigation.

Meanwhile, the family of two-year-old Matthew Malgas, who died in the bus accident on Heights Road on Saturday evening, has been left devastated.

A bus with 35 occupants – the full Excelsior team with reserves (30 in total), two board members, the coach, bus driver, and little Matthew – crashed down an embankment in the Wilderness area at about 18:00 on Saturday evening, 21 May.