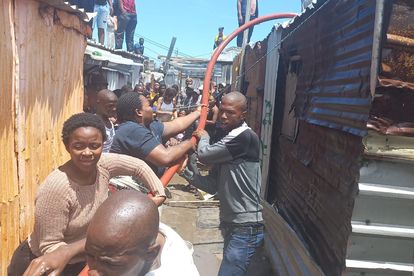 A fire broke out in Masiphumelele, Cape Town on Monday, 21 November. Approximately 70 firefighters battled the blaze, which destroyed 375 structures.

ANOTHER FIRE BREAKS OUT IN MASIPHUMELELE

On Tuesday, Sonica Lategan, from the City’s Disaster Management office, said an estimated 1800 individuals were affected by the fire.

“No fatalities or injuries to people have been reported.  The SPCA is however providing care to six dogs that sustained burn wounds,” said Lategan.

Monday’s fire in the Z-section of Masiphumelele is the second fire to hit the settlement near Fish Hoek in less than a month.

On 31 October, one person was killed and 430 were displaced when 100 structures were destroyed in D-section.

The City said the initial assessment indicates that electrical overhead lines, water taps and toilets were damaged in the fire.

“A multidisciplinary team including SASSA, Department of Social Development and Human Settlements will consider further options to provide relief to the affected persons,” said Lategan.

Fire and Rescue spokesperson, Jermaine Carelse, said the firefighters from the Kommetjie Road station saw smoke rising from Masiphumelele at approximately 9:40 on Monday.

When crew members arrived at the scene they found several structures on fire but community members allegedly interfered with their work and the police and law enforcement had to be called in.

City MayCo member for Safety and Security, JP Smith, said residents grabbed the firefighters’ hoses in an attempt to put out burning structures that were already swallowed by the inferno.

“Desperate residents then took to stabbing the pressurized hoses, trying to gather water for their own hopeful attempts. With Law Enforcement unable to retain order as chaos resumed, the flames spread into the wetlands towards Lake Michelle,” he said on Monday.

“Firefighting is an art, a special skill of which graduates spend much time learning, qualifying for, then regularly practicing as they hone such skills. When teams arrive on a scene, if communities are compliant and allow members to perform the task, such loss can be significantly reduced and avoided. Sadly today, this was not the case. We call upon all community members and leaders, to please help convey this important message.”