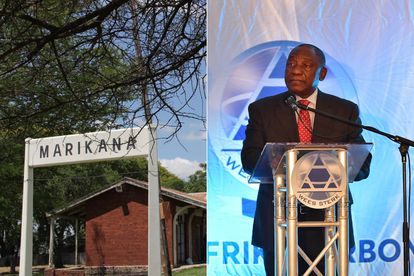 The Marikana mineworkers’ case to sue Ramaphosa, Government and Sibanye Stilwater is back in court. Photo: GCIS and Jean / Flickr

The Marikana mineworkers’ case to sue Ramaphosa, Government and Sibanye Stilwater is back in court. Photo: GCIS and Jean / Flickr

The Marikana mineworkers’ case to sue President Cyril Ramaphosa, Government and Sibanye Stillwater is set to kick off in the Gauteng High Court. The mineworkers have been embroiled in a seven-year legal battle as they fight for nearly R1 billion.

Case put on hold due to application for Judge’s recusal

In September 2021, the civil suit was put on hold. This was after almost 330 victims of the Marikana massacre lodged a successful application for the recusal of Judge Colin Lamont.

The civil suit was put on hold in September last year after nearly 330 victims of the Marikana massacre successfully lodged an application for the recusal of Judge Colin Lamont. Judge Lamont was initially supposed to preside over the matter.

The mineworkers lodged the application for his recusal after it was revealed that the judge owned around R225 000 shares at Sibanye Stillwater.

Lamont said he believed he would be impartial and not act in a biased way against the plaintiffs. However, he agreed to withdraw from the matter.

“The test is not whether I am biased but whether I am seen to be biased. As the plaintiffs, on reasonable grounds, see me as a person who might not be impartial, I am bound to recuse myself,”

President Ramaphosa previously held shares in Lonmin through Incwala Resources. The mineworkers have accused the president of inciting violence, exerting pressure and characterising their strike as unlawful.

They believe that Ramaphosa’s decision led to the use of force by the police which resulted in fatal consequences. The mineworkers mentioned an email sent by Ramaaphosa demanding ‘concomitant action’ be used against them.

They also blamed Ramaphosa for putting pressure on politicians who controlled the means of violence. These politicians include the army and police.

“The first defendant (Ramaphosa) had sought to exert pressure on politicians and ministers of state to take violent action,”

The mineworkers are suing the president in his personal capacity as a director of Lonmin at the time of the Marikana Massacre, reports IOL.