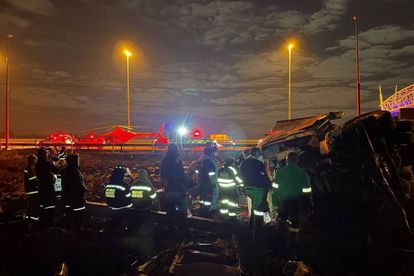 A man’s lower legs were amputated after being crushed in a truck accident on Thursday morning.

Shawn Herbst, Netcare911 spokesperson said the accident happened on the R21 near the 1-Stop in Esselenpark on the East Rand.

“At 02H35 Thursday morning, Netcare 911 responded to a collision on the R21 near the 1-Stop in Esselenpark on the East Rand.”

Herbst said reports indicate that the driver in his 40s of a heavy motor vehicle transporting oranges lost control, resulting in a roll-over.

“The driver, an adult male, sustained serious injuries and was trapped in the wreckage of the crushed cab.”

Herbst furthermore said rescue crews worked fervently for six hours to free the man using hydraulic tools, however, due to the mechanism of the entrapment were not able to do so.

” As a last resort to save the rapidly deteriorating patient’s life, surgical amputation of both limbs below the knee was carried out.”

He said this was after a consultation between senior medical doctors, a trauma surgeon from a specialised Netcare Emergency Department who was brought to the scene to evaluate options.

“Once freed, the patient was stabilised by the doctor before being flown by Netcare 911 helicopter ambulance to a specialist facility for the urgent care he required.”

Meanwhile, the South African soccer fraternity has been left devastated after it was confirmed that former Mamelodi Sundowns media officer Thulani Thuswa died in an accident earlier this month.

Reports of Thuswa’s tragic passing in a car accident between Marlboro and Grayston near Sandton around 07:00 circulated on social media on Sunday morning

ICYMI: Ex-Chiefs star to be coached by Dwight Yorke

Case of son who killed mom, DRANK her blood from her wounds delayed

Monkeypox in SA: No secondary cases have been detected thus far, says NICD