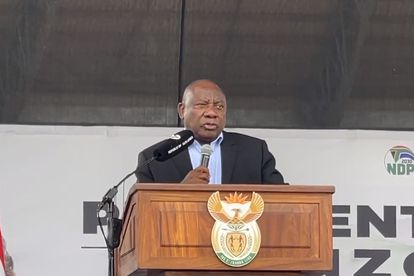 The Mangaung metro was placed under administration just days ago by his cabinet. On Saturday, President Cyril Ramaphosa visited the city after holding his presidential imbizo in Bloemfontein. The municipality has been plagued by corruption, political infighting and a near-complete collapse of service delivery.

Ramaphosa: Change is coming to Mangaung

At the Imbizo and after, Ramaphosa interacted with over 2000 citizens from Mangaung and the province. This Imbizo is Ramaphosa’s 2nd following his State Of the Nation Themed “Leave No One Behind.”

Ramaphosa also had his say on the decision to place the metro under administration. According to the president, the blame can be placed firmly on the Free State provincial executive.

“Following failure by the Free State provincial executive to implement a financial recovery plan in the Metro, the municipality has now been placed under a national intervention. The intervention is directed at helping the Metro to improve its finances and to deliver on its mandate, and to return to sound governance and a better life for residents, the business community and other stakeholders.”

During his address to the Mangaung crowd, Ramaphosa responded directly to claims that the city is only clean when there are government officials visiting.

He told residents that they should see his presence today as “the beginning of a process that is going to lead to change”.

With so many journalists around, Ramaphosa was also unable to escape more questions about Diepsloot.

Ramaphosa is not at all pleased with the police’s actions. According to the president, it’s going back to the “apartheid way of doing things.”