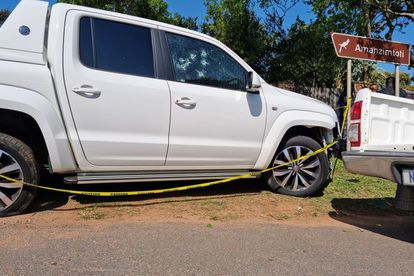 A man was shot in the head while another was injured in a shooting in Amanzimtoti shooting on Friday morning.

“Earlier this morning, Emer-G-Med paramedics, together with ET Rapid Response, responded to the scene of a shooting incident on Umdoni Road in Amzamzimtoti.”

He said on arrival on the scene, a Volkswagen Amarok and a Mercedes-Benz were found parked outside a residence, riddled with bullet holes.

“On closer inspection, a male approximately thirty years of age was found seated in the Mercedes-Benz, having suffered a gunshot wound to the head.

“Advanced life support intervention was needed to stabilize him, before he was placed onto a mechanical ventilator to assist the man with breathing and transported rapidly by ambulance to a nearby hospital for further care.”

Van Reenen said a second man was found in the Volkswagen, and was treated for moderate gunshot injuries by a private ambulance service.

ALSO READ: Woman gives birth on the side of the road with the help of police constable

NO MOTIVE FOR THE SHOOTING YET

“At this stage the motive for the shooting is unknown and will form the subject of a South African Police Services investigation.”

ALSO READ: JUST IN: Zuma refuses to be examined by NPA doctors

Meanwhile, police have arrested two men in connection with the murders of three innocent people earlier this year in Gqeberha.

THE SHOOTING HAPPENED IN APRIL 2021 IN GQEBERHA

“Davedene Van Zyl (21) and Johannes Bruintjies (36) were fatally wounded after exiting the offices of the bus company. Van Zyl collapsed close to the office while Bruintjies collapsed in the premises of a shopping centre. An innocent bystander, Fortune Nyathi (28) was also fatally shot by stray bullets as he left a supermarket. All three deceased sustained multiple gunshot wounds.”

Naidu said police managed to arrest a further two men in connection with the triple murders.