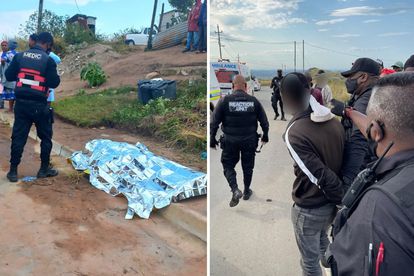 A 21-year-old man was murdered on Thursday after he allegedly refused to return borrowed clothes in Iqadi in KwaZulu-Natal.

THE MAN WAS ALLEGEDLY CONFRONTED BY TWO BROTHERS

He said members of Reaction Unit South Africa (RUSA) arrived on scene at approximately 09:06 on Thursday.

Balram said the murdered man was allegedly confronted by two brothers who had asked him to hand over a pair of jeans that he had borrowed.

“The brothers confronted the man who was known to them outside his home and asked him to hand over a pair of jeans which he borrowed.

“The man refused and insisted that they return a pair of takkies which they borrowed from him then only would he hand over the jeans.”

THE MAN ALLEGEDLY REFUSED TO HAND OVER A BORROWED JEAN

Balram said the older brother, who is a 28-year-old man, grabbed the victim and pinned him to the ground when his teenage brother (18) stabbed him in the chest.

“The injured man died at the scene. Both brothers fled on foot in an unknown direction.”

He furthermore said members of Reaction Unit South Africa (RUSA) arrived on the scene at approximately 09:06. A witness was interviewed and provided a clothing description of the brothers.

THE BROTHERS PINNED HIM DOWN AND STABBED HIM IN THE CHEST

“The 18-year-old teenager who was hiding in an outdoor toilet approximately a kilometre from the scene was arrested by RUSA officers while members of the community apprehended his brother.”

Both brothers were handed over to the Ndwedwe SAPS, and a case of murder is being investigated.

The murdered man’s identity is not yet known.