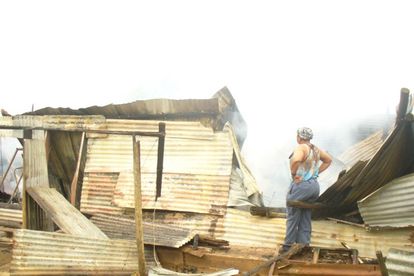 Community members extinguished the fire and saved the wife and kids of the man who locked them inside the shack before setting it alight. PHOTO: http://gpsnews.co.za/

Community members extinguished the fire and saved the wife and kids of the man who locked them inside the shack before setting it alight. PHOTO: http://gpsnews.co.za/

A man is sentenced to prison for locking his wife and kids in a shack and then setting it alight while they were inside.

The man, Ace Ndlovu, 35, was sentenced to prison for several charges related to the incident, Mpumalanga police said.

Community members assisted to extinguish the fire and took the wife and children to the hospital, said Mohlala.

Police were notified about the incident. Upon arrival, they found Ndlovu had sustained burn wounds himself. He was arrested and taken to hospital under police guard.

“The man was then charged with three counts of attempted murder, arson as well as contravention of a protection order.”

The arsonist was handed a hefty sentenced after his trial was heard before the Carolina Magistrates Court.

“The court sentenced Ndlovu to ten years for attempted murder and arson, plus an additional three years for contravention of a protection order.”

The Mpumalanga police commissioner Lieutenant General Semakaleng Daphney Manamela commends the community for saving the lives of the woman and children trapped in the burning shack.

“This is no longer time to fold hands and do nothing when crime happens. Everyone has got a role to play and one can imagine what could have happened to the victims if members of the community decided to just watch and not assist.”

“This is a clear indication that we all need each other in the fight against crime, more especially crimes directed on women and children. We hope the sentence will serve as a deterrence to others,” Manamela said.