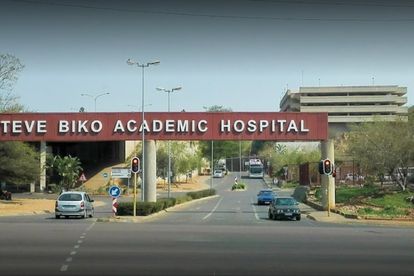 Operations have been cancelled at the Steve Biko Academic Hospital in Tshwane. Image: Google/Igmar

Operations have been cancelled at the Steve Biko Academic Hospital in Tshwane. Image: Google/Igmar

A man at Steve Biko Academic Hospital lost his life after jumping to his death in a suicide attempt in Pretoria.

The patient, aged 34, jumped out of a ward on the sixth floor of the hospital on Thursday afternoon. He however landed on the third floor instead, the hospital said.

The man sustained serious injuries and was taken into theatre for surgery that evening.

The hospital on Tuesday denied claims that the man had died.

“Some people on social media have falsely confirmed that the patient has been declared dead. We appeal to the public not to circulate unverified information as this is insensitive and offensive to the family of the patient.”

PATIENT SUCCUMBS TO HIS INJURIES

But the man eventually lost his life. Steve Biko Academic Hospital spokesperson Lovey Mogapi confirmed to The South African on Wednesday morning that the patient did not make it.

“He, unfortunately, passed away. He wouldn’t have made it. We tried everything we could do to save him but he did not make it.”

The man died shortly after his surgery, after being released from theatre.

Mogapi could not confirm what the patient was initially admitted for but said that he was not a psychiatric patient.

“He was admitted for something else,” she said.

ANOTHER FALLS TO HIS DEATH AT MENLYN MALL

Just a few days earlier, a man fell to his death at popular mall Menlyn Shopping Centre on Sunday.

It is not clear whether the man jumped or was pushed from at least the fourth floor of the large mall.

The 29-year-old was declared dead at the scene and paramedics were unable to provide any life-saving interventions.

Police are investigating the matter.

But just a month before, another man plummeted to the ground floor of the same mall from the sixth floor.

The 31-year-old actually landed just in front of the children’s play area. He was taken to hospital in a critical condition but also succumbed to his injuries and died in hospital.

ALSO READ: Menlyn Mall mystery: ANOTHER man falls to his death on Sunday