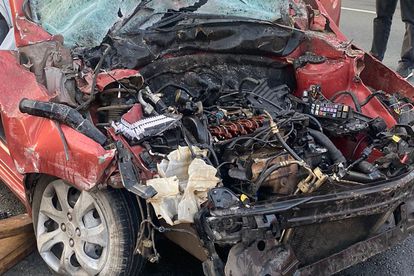 A man was seriously injured when a truck tyre hit his vehicle on the N3 on Sunday afternoon.

THE MAN, IN HIS 40S, WAS LEFT SERIOUSLY INJURED

According to ER24 spokesperson Russel Meiring, the accident happened on Sunday afternoon near the Van Buuren offramp Bedfordview.

“This afternoon, a man in his 40s was left seriously injured when his light motor vehicle collided with a truck tire on the N3.

“ER24 and other services arrived at 16h45 to find a wrecked light motor vehicle in the middle of the highway.”

Meiring said the driver, a man in his 40s, was found lying trapped in the car in a serious condition.

SPECIALISED EQUIPMENT WAS USED TO FREE THE MAN

“The Fire Services had to use specialised equipment to free the man from the vehicle. Once released, the man was treated and provided with pain-relief medication before being transported to a private hospital for urgent care.”

He furthermore said that it is understood that the man’s vehicle had collided with a tire that had come loose off a truck.

Meanwhile, also on Sunday, a man and woman were injured when their motorbike crashed into a light motor vehicle on Laurie Road in Edenvale.

Meiring said ER24 and another service arrived at 12h05 to find the motorbike on the side of the road.

ALSO READ: Five-year-old fighting for his life in ICU after a FREAK accident at school

“A man in his 60s and a woman in her 50s were found lying in the middle of the road.

“Paramedics assessed the patients and found that the man was in a critical condition while the woman was in a serious condition.”

He furthermore said paramedics treated the patients and provided both with advanced life support before being transported to nearby hospitals for urgent care.

The driver of the light motor vehicle, fortunately, escaped injury.