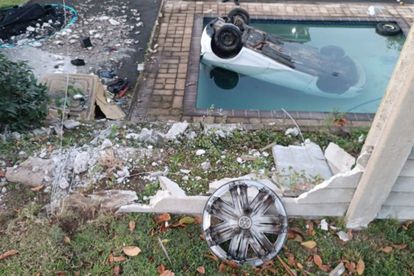 A man in his forties was found dead in a car submerged in a swimming pool on Wednesday morning. Photo: Redline Response.

A man in his forties was found dead in a car submerged in a swimming pool on Wednesday morning. Photo: Redline Response.

A 40-something man was found dead in Westville, KwaZulu-Natal on Wednesday morning, 10 August. When first responders arrived at the scene, they found a vehicle submerged in a swimming pool.

Redline Response spokesperson Derrick Banks said paramedics received a call at approximately 6:30 on Wednesday and when they arrived at the property in Baden Road, they found a vehicle lying on its roof in a swimming pool.

The driver of the vehicle, a man believed to be in his early forties, was found dead inside it; it is unclear how long the car was in the water. Neighbouring residents said they may have heard a noise at approximately 00:30 but didn’t see anything, according to the Redline Response spokesperson.

Local metro police and South African Police Service (SAPS) members were at the scene and the circumstances that led to the fatal accident are under investigation.

In an unrelated incident in Gauteng, two alleged business robbers were arrested by K9 Unit members after a car chase and shootout. It is alleged that the suspects committed an armed robbery in Bloemfontein on the day of their arrest.