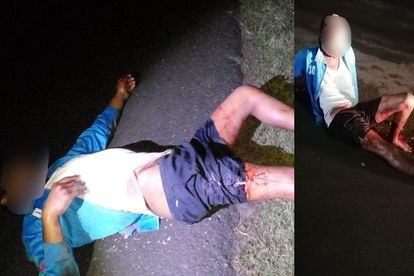 A man walking home was attacked, robbed, and BRUTALLY stabbed in the buttocks and legs.

According to Reaction Unit SA (RUSA spokesperson Prem Balram the attack happened in the early hours of Sunday morning.

“A man was repeatedly stabbed during a robbery shortly after leaving a nightclub in the Verulam CBD in KwaZulu-Natal.

“A passerby contacted Reaction Unit South Africa (RUSA) at approximately 02:04 after the pedestrian was discovered on Garland Street in Temple Valley bleeding from his injuries.”

THE INJURED MAN WAS FOUND BLEEDING ON THE ROADSIDE

Balram said reaction officers found the man was stabbed multiple times on his legs and buttocks.

“The man explained that he was walking to his Waterloo – KZN residence shortly after leaving a nightclub when three unknown men accosted him.

“The suspects produced knives and robbed him of a Nokia cellphone and R80 in cash. He was stabbed multiple times during the robbery. The robbers fled on foot in an unknown direction, leaving him bleeding on the roadside.”

He said the reaction officers conducted an extensive search for the suspects; however, no arrests were made.

According to Reaction Unit SA (RUSA) spokesperson Prem Balram, the 27-year-old man was shot multiple times by three suspects who were fleeing the scene of a robbery in Vanrova.

“The Reaction Unit South Africa (RUSA) Tongaat Operations Center received a call for assistance at approximately 19:43 from a resident requesting assistance for the injured man.

ALSO READ: Man dies after being stabbed in chest and buttocks in KZN