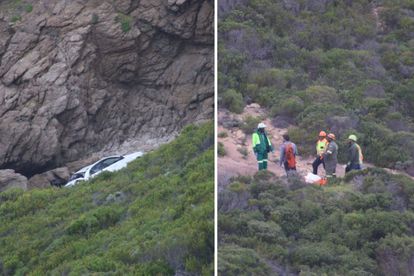 A 50-year-old man died after his vehicle plunged off the DEADLY Voëlklip cliff on Thursday afternoon.

THE BODY OF THE MAN WAS RECOVERED ON THURSDAY AFTERNOON

According to police spokesperson Sergeant Christopher Spies, emergency services were dispatched to the scene at about 15:30 on Thursday.

“Emergency services were dispatched to the scene at about 15:30 after a member of the public alerted authorities about a vehicle that went down a cliff. A search and rescue operation resulted in the retrieval of the body of a 50-year-old man from George, later.”

ALSO READ: Husband kills wife before turning the gun on himself at Voëlklip

POLICE ARE INVESTIGATING THE INCIDENT

“The investigation into this matter continues.”

The identity of the man is not yet known.

NOT THE FIRST FATAL ACCIDENT AT THE EXACT SPOT:

According to a report by Dotsure, Voëlklip has been a point of contention among concerned residents, who have debated whether the road should be closed.

The report furthermore stated that it was declared safe for public use by the Herold’s Bay Ratepayers Association and Western Cape Department of Transport and Public Roads, provided drivers exercise caution.

It suggested that the matter of road closure was made more complex because the site runs through privately-owned land and is recognised as an area of recreational and tourism value.

“To address this, George Municipality facilitated a Task Team, which consisted of the Department of Environmental Affairs, Western Cape Provincial Transport and Public Works, Herold’s Bay Ratepayers Association, and the owner of the property. Remedial work was proposed by the Task Team and approved by the provincial authority – but because the road is on private land, the municipality was not allowed to allocate funds to it and the project was unable to move forward.”

ALSO READ: Missing woman killed in an accident at the notorious Voëlklip cliff