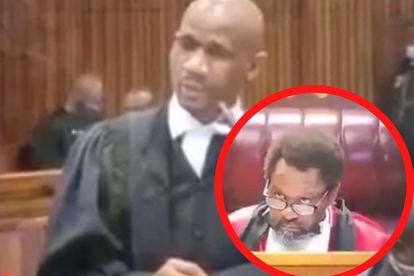 Tweeps seem to think defence lawyer, Advocate Malesela Teffo wanted to do more than just talking when he requested for him and Presiding Judge, Tshifhiwa Maumela to go to the chambers following their clash at the Pretoria High Court on Monday.

Maumela had some sharp words for Teffo and told him to sit down several times.

Judge Maumela told Teffo several times that if he will not be responding to whether the proposed dates for a postponement are suitable to him or not he should sit down.

Despite what Judge Maumela had said Teffo went on to speak about what he wanted the court to hear.

“Because you are Adv Teffo you demand to speak whenever you want, it is not your time to speak,” Maumela said.

Responding to what had happened earlier, Teffo addressed the way Maumela had spoken to him. He said whenever he has to make a humble submission on behalf of his clients he is told to sit down like he is a nughty boy.

In turn, Maumela said what continues to surprise him is that whenever Adv Teffo is overruled in any matter whenever he is given a chance to speak, he will go back to an issue in which the court has already given a ruling and that purports to be an opponent of ethics.

“Disrespect to him is when he is warned by the court several times but he still continues to go back to issues that the court has already made a ruling on.”

Maumela further said that court rules are written in black and white and etiquette states that a party will present its case and the other party will be given an opportunity to reply.