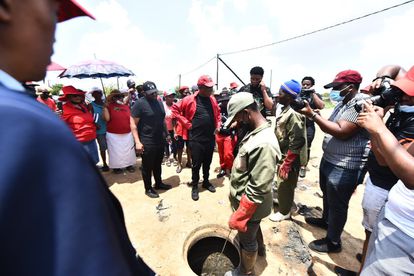 EFF leader Julius Malema has vowed to put pressure on the ruling party in Mangaung because of service delivery issues.

The African National Congress (ANC) retained control of the Mangaung Metro by winning an outright majority on the council during the 2021 Local Government Elections.

Malema was on an oversight inspection in areas that have been affected by sewage spills in Bloemfontein on Thursday. This comes after residents said they have been battling the problem for some time.

SEWAGE SPILLAGE ISSUES WILL BE PRIORITISED

According to a report by the Bloemfontein Courant Malema said that he would ask the EFF councillors to put pressure on Mangaung officials to prioritise sewage spillage issues.

According to Malema, issues of sewage spillages are a result of old small pipes that were not replaced with bigger pipes required by a growing population.

‘IN BLACK COMMUNITIES, IT HAS BEEN NORMALISED’

“We cannot continue with sewerage systems that operated in the 70s and 80s in 2022. That is a recipe for disaster. What is unfortunate is that when there are sewage spillages in town, it gets fixed within a few hours. But in our black communities, the problem has actually been normalised. They live with it, as if there is nothing wrong. When you get out of the car, the place just smells bad,” he reportedly added.

In his visit to Heidedal, Malema said that they would assist an old lady who’s in a wheelchair and could not get out of her home because of sewage spillages outside her house.

MALEMA IS EXPECTED TO VISIT MORE AREAS IN MANGAUNG

He said that they would build a pavement at the home of the elderly woman and clear sewage spillages in her street so that she will be able to go out.

Malema was expected to visit Batho, Joe Slovo and Turflaagte in Mangaung.

WHAT IS THE RESPONSE FROM THE MUNICIPALITY?

Meanwhile, the Mangaung Metro has reportedly attributed the challenges to the overburdened infrastructure.

Spokesperson of Mangaung Metro Qondile Khedama told the SABC that they were working on an immediate plan to deal with these spillages.

“We want to assure the community of Mangaung that this is the matter that is receiving the utmost attention. We understand that the hygiene of the community is highly affected, and we want to apologise. All the inquiries that are brought to the attention of the city are being attended,” Khedama said.

ALSO READ: Julius Malema: ‘We did not vote for the DA, we voted against the ANC’