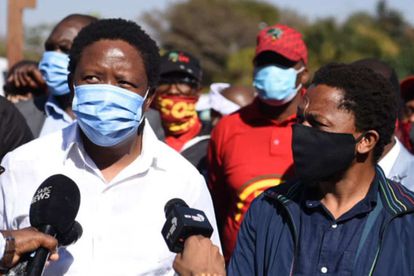 The leader of the Economic Freedom Fighters (EFF) Julius Malema and the party’s MP Mbuyiseni Ndlozi are expected to appear before the Randburg Magistrate’s Court on Tuesday, 13 October 2020, for their assault case.

The pair stand accused of assaulting a police colonel in April 2018 during the funeral of struggle stalwart Winnie Madikizela-Mandela. The scuffle broke is alleged to have broken out after the police officer refused to grant them entry to the Fourways Memorial Park in Johannesburg, where the struggle veteran was laid to rest.

According to Afriforum, fierce critics of Malema and his party claim the police officer subsequently laid a charge of assault at a police station in Douglasdale, but that his complaint was ignored. This then prompted them to intervene.

The National Prosecuting Authority (NPA) has hit back at  the lobby group, which had lashed out over the lack of action in the matter.

Malema: ‘We are happy to be dragged to court by the boers’

Both Ndlozi and Malema had initially denied the attack, unaware of the fact that it had been captured on camera.

“I’ve never done that. If I laid a hand on him, I would have panel-beaten him. I don’t play when I lay a hand. I didn’t do that. Mbuyiseni didn’t do that. All we were fighting for was to enter the cemetery and go to bury our mother,” Malema is quoted as having said.

The duo seems to be unfazed by the court case, having once said they were happy to be dragged to court by “boers.”