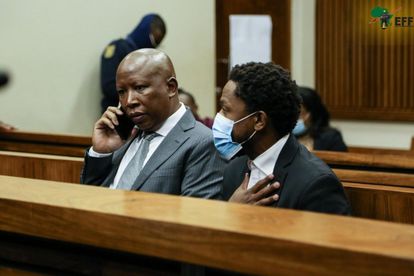 The EFF’s Julius Malema and Mbuyiseni Ndlozi assault trial has been extended once again but this time after a state witness bunked court. Photo: Twitter/@EFFSouthAfrica

The EFF’s Julius Malema and Mbuyiseni Ndlozi assault trial has been extended once again but this time after a state witness bunked court. Photo: Twitter/@EFFSouthAfrica

EFF leader Julius Malema and the party’s commissar Mbuyiseni Ndlozi left the grieving Gardee family in Mpumalanga to attend court only for the state witness to not pitch up. The duo appeared in the Randburg Magistrate’s Court on Friday for the continuation of the assault case laid against them by police officer Lieutenant Colonel Johannes Jacobus Venter in 2018.

STATE WITNESS A NO SHOW

The National Prosecuting Authority (NPA) has been left red-faced after their state witness was absent on Friday.

The state’s last witness was expected to testify before the court, however, they were a no-show.

The presiding magistrate said during court proceedings no excuse or explanation had been made by the witness to justify their absenteeism.

The case against Malema and Ndlozi has been ongoing for a couple of years and the magistrate gave the state a tongue-lashing over the drawn-out proceedings.

According to the NPA, the witness was expected to take the stand on Friday morning.

Malema and Ndlozi’s case was postponed to 3 June. However, up until that point deadlines were given by the magistrate to both legal teams.

The state is instructed to electronically submit their heads of argument by 13 May, while the defence was given until 20 May.

The commander-in-chief of the red berets and Ndlozi are charged with assaulting police officer Lieutenant Colonel Johannes Jacobus Venter at the funeral of the struggle stalwart Winnie Madikizela-Mandela in April 2018.

Both Malema and Ndlozi have pleaded not guilty to the assault charge, a charge they have claimed is part of a political character assassination agenda.

Venter previously testified that Malema and Ndlozi pushed him at the entrance of the Fourways Memorial Park, where Madikizela-Mandela was laid to rest. The alleged assault supposedly occurred when he attempted to prevent their vehicle from entering the cemetery.

READ MORE: Malema and Ndlozi back in court for 2018 assault of police officer