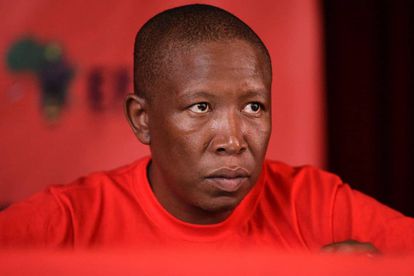 Julius Malema says there’s no chance that the Economic Freedom Fighters (EFF) will not consider a coalition with the Democratic Alliance (DA), should it come to that after South Africa’s general election.

Malema made the comments while speaking to the media at the Rand Easter Show on Tuesday.

“After insulting us like that, they expect to come and call us to sit and share a government … I don’t think it will work. We are giving the DA power in Tshwane and Johannesburg. They are biting the hand that is feeding them and expect that hand to continue feeding them. It’s unscientific; it won’t work,” Malema was quoted as saying.

Malema didn’t hold back on his views about the African National Congress (ANC). Saying the “corrupt” ANC is “hell-bent” on stealing “people’s resources”.

Why the DA has got Malema hot under the collar

Malema has been vocal about the DA’s campaigning ahead of South Africa’s general election scheduled for 8 May 2019. The City Press reported in January that Malema was very irate over the way the DA has used the VBS scandal as ammo to campaign.

Over the past year, the EFF has been embattled by numerous corruption scandals, both from internal dissidence and external fallouts. The VBS Mutual Banks saga, which essentially defrauded thousands of low-income households, is the most well-known example. It includes familial connections and investigations casting a shadow on the party’s deputy president, Floyd Shivambu.

Malema has repeatedly denied these allegations and claims its all part of a conspiracy to ‘defame’ the EFF.

And the firebrand politician has been warning the DA for some time now that there won’t be much love in a time of coalitions.

Back in January, he was quoted by the Sunday paper as saying:

“The people making it possible for you to have power, you must have some decency when you deal with them.”

More recently, Malema has said he’s happy to share the party’s financial records, but only after elections. Go figure.

Despite the apparent corruption, though, the firebrand leader said the EFF will sit down for coalition talks with the ANC, but he’s not interested in those same discussions with the DA.

“I don’t imagine myself sitting with [DA leader Mmusi Maimane] again on the same table after he said we stole the money of VBS, even when there is no such evidence of stealing money. He just went on a rampage against us.”