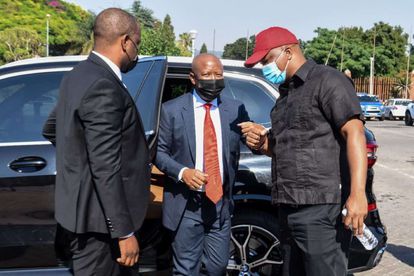 The matter stems from a physical confrontation both Malema and Ndlozi are alleged to have been involved in, at the funeral of struggle stalwart Winnie Madikizela-Mandela in April 2018. They are said to have assaulted Johannes Venter, a high-ranking South African Police Service (SAPS) colonel, who had attempted to prevent them from entering Fourways Memorial Park in Johannesburg, where Madikizela-Mandela was being laid to rest.

They have pleaded not guilty to the charges.

Venter took the stand where he gave his account, of how the incident unfolded. He told the court he had been stationed at the main entrance of the graveyard, when Malema’s vehicle approached him.

The colonel said Malema’s car did not have any visible permit for it to be allowed to enter the cemetery. He then approached the driver who then informed him that the main occupant was Malema.

“I looked inside the vehicle and greeted him, I informed him that vehicle can’t enter and was more than welcome to walk inside”

“Mr Malema said he will not walk inside but he will drive in. At that stage, it was the driver and one passenger in front. Mr Malema informed me they won’t walk in. I said I will first get permission from the Venue operation Centre,” Venter recalled.

However Venter did admit that both Ndlozi and Malema did have permits. At some point during the interaction, he alleges that they pushed him several times – so forcefully that he lost his balance and fell.

It was Afriforum which brought the case to the forefront, claiming that the matter was not given much attention after Venter had laid charges at the Douglasdale Police Station in Johannesburg. Malema and Ndlozi had initially denied assaulting the colonel, however the lobby group uploaded footage of the incident.

“I’ve never done that. If I laid a hand on him, I would have panel-beaten him. I don’t play when I lay a hand. I didn’t do that. Mbuyiseni didn’t do that. All we were fighting for was to enter the cemetery and go to bury our mother,” Malema is quoted as saying in 2019.