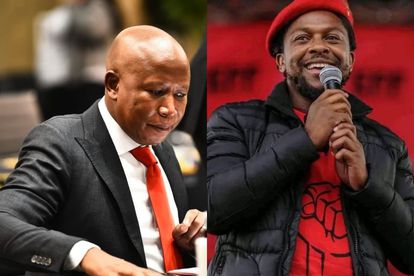 Julius Malema and Mbuyiseni Ndlozi are in the Randburg Magistrate’s Court on Thursday for the case of assaulting a police officer in 2018. Photo: Twitter

Julius Malema and Mbuyiseni Ndlozi are in the Randburg Magistrate’s Court on Thursday for the case of assaulting a police officer in 2018. Photo: Twitter

The Economic Freedom Fighters’ (EFF) Julius Malema and parliamentarian Mbuyiseni Ndlozi are in the Randburg Magistrate’s Court on Thursday. The 2018 case where the two allegedly assaulted a police officer in a cemetery is set to continue.

The commander-in-chief (CiC) of the red berets and Ndlozi are charged with assaulting police officer Lieutenant Colonel Johannes Jacobus Venter at the funeral of the struggle stalwart Winnie Madikizela-Mandela in April 2018.

The duo have pleaded not guilty to the assault charge, a charge they have claimed is part of a political character assassination agenda.

Venter previously testified that Malema and Ndlozi pushed him at the entrance of the Fourways Memorial Park, where Madikizela-Mandela was laid to rest. The alleged assault supposedly occurred when he attempted to prevent their vehicle from entering the cemetery.

Malema and Ndlozi last appeared in court in December before a four-month-long postponement.

Thursday’s court proceedings follow a four-month postponement of the case after one of the accused’s legal representatives was apparently in contact with someone who tested positive for COVID-19.

In October 2020, Venter told the court he went to a district surgeon and his family doctor after the incident but did not obtain a medical record.

Venter told the court in October 2020 he visited a district surgeon as well as his family doctor after the alleged assault, however, the police officer did not receive a medical record. It also came out during court proceedings that Venter did not obtain a J88 form from a police station so that his medical examiners could record his injuries.

According to a TimesLIVE report, Venter was questioned during cross-examination if he had spoken to colleagues about the pain he alleged to have endured after his encounter with Malema and Ndlozi.

Venter said he did not complain because he wanted to continue with his job.

Laurance Hodes, the legal representative for Malema and Ndlozi, told Venter there was no manifestation of any injury, to wit Venter agreed.

Footage of Malema and Ndlozi supposedly assaulting the officer was captured on video but a forensic analyst who took to the witness stand said it was “possible” that the extracted photo album from CCTV footage was manipulated.

SABC reported last year that the state witness in the case delivered evidence in the case that he kept a copy of the CCTV footage of the incident for himself.

Deon Klingbiel was the manager of the Fourways Memorial Cemetery in 2018 during the funeral of Madikizela-Mandela.

Defence lawyer Hodes questioned Klingbiel through an interpreter on why he did not mention in all of his three statements to the police, that he made a copy for himself.

ALSO READ: Explainer: Why is the EFF picketing outside Johann Rupert’s farm?