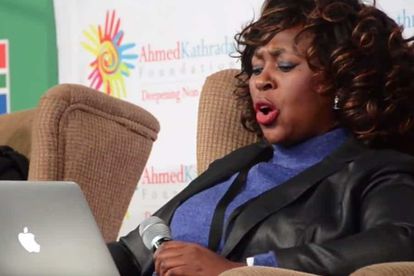 Ex-ANC Member and founder of the ADEC (African Democratic Change) movement Makhosi Khoza has given us her opinion on the ANC top six. Spoiler alert: She is not regretting her exit from the party earlier this year.

She lambasted the nominations of David Mabuza, and Ace Magashule. Both have been implicated in corruption scandals, and would embody the type of ANC that Jacob Zuma has become synonymous with.

If the party are looking for a genuine change, then they’ve got off to a rocky start. Khoza expressed her doubts over the organisation’s ability to move forward, and feared that their presence as part of Cyril’s team would leave him hamstrung. Here’s what she said in a post shared to Facebook:

“I have no regrets. What change could Cyril Ramaphosa bring when surrounded by David Mabuza as Deputy President, and Ace Magashule as his Secretary General? This is a toxic mix.”

“We must focus on building our structures on the ground (up ADEC). We need the younger generation and women. Our problem is corruption that remains in the current ANC arrangement. Women deserve a better deal than Jessie Duarte as a sole female on the top six.”

“Change! Change! Real change. That is what South Africa is yearning for.”

Makhosi Khoza spent most her last year in the ANC speaking out about the corruption that had engulfed the party. She refused to remain silent, and stayed resilient in the face of death threats from pro-Zuma supporters.

By a wide margin, she was the loudest voice fighting against the ills of the organisation. But she was as good as isolated in her brave stance, and decided to leave the ANC back in September during a press conference.

She immediately dismissed calls to join the DA or the EFF. In fact, she chose to start her new political party ADEC – an anti-corruption movement that looks to develop education in the country and improve living standards through job creation.

Who knows. Perhaps her party will be giving the likes of Mabuza and Magashule serious headaches by time the 2019 elections come round?