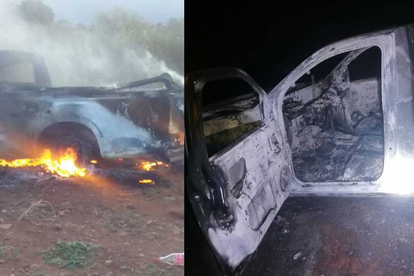 Three men who were suspected of stealing goats in Limpopo were allegedly stoned and their vehicle torched. Images: SAPS.

Three men who were suspected of stealing goats in Limpopo were allegedly stoned and their vehicle torched. Images: SAPS.

Limpopo Police Commissioner, Lieutenant General Thembi Hadebe has warned of harsh consequences on anyone who takes the law into their own hands after three people suspected of stealing goats were stoned and their vehicle torched.

The incident happened on Thursday 29 September 2022 in Mafefe village under Malipsdrift policing area.

Police spokesperson, Lieutenant Colonel Malesela Ledwaba said police were called after some community members were seen chasing a motor vehicle all the way from Mecklenburg.

Ledwaba said preliminary investigations indicated that while the suspects were trying to escape they knocked down a pedestrian and he died on the scene. The deceased was identified as 30-year-old Sekepe Kobeene from Bothabothe in Lesotho. One of the victims that was stoned to death was identified as 31-year-old Keago Collen.

Limpopo Police Commissioner called on residents to desist from this type of behaviour and instead work with the police to ensure criminals are uprooted and face the full might of the law.

Police have urged anyone with information that can assist in arresting the suspects to contact Detective Sergeant Jim Mophoso on 0824457724 or the crime stop number 0860010111.

In a separate incident also in Limpopo in August this year, two men were reportedly stoned to death and their bodies burnt by community members at Tshavhalovhedzi village under Siloam policing area.

According to police, reports suggest that three suspects allegedly robbed a 23-year-old woman of her cellphone and other belongings at a local Plaza. They then attempted to kidnap her in full view of the bystanders but hastily left her and drove off after she screamed for help.

You can read the full story here.