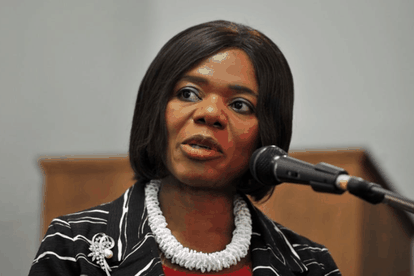 Former Public Protector, Advocate Thuli Madonsela speaks during a media conference at the Cape Town Press Club on January 16, 2017 in Cape Town, South Africa. When asked whether she would avail herself for the country’s to job, Madonsela said she has no desire to run for South Africa’s presidency. Photo: Gallo Images/Lulama Zenzile

Former Public Protector, Advocate Thuli Madonsela speaks during a media conference at the Cape Town Press Club on January 16, 2017 in Cape Town, South Africa. When asked whether she would avail herself for the country’s to job, Madonsela said she has no desire to run for South Africa’s presidency. Photo: Gallo Images/Lulama Zenzile

Former public protector Thuli Madonsela gives as good as she gets. On Monday 7 September, while Economic Freedom Fighters (EFF) members stormed multiple Clicks stores across the country demanding justice for a ‘racially insensitive’ hair campaign, Madonsela said the violence is not necessary. Her words sparked a fierce debate with Mbuyiseni Ndlozi.

Following the release of a Clicks hair campaign that insulted black people in all corners of the country, the EFF decided to teach the franchise a lesson by vowing to show up at various stores and did they stick to their word!

On Monday alone, two Clicks stores were petrol bombed. One in Cycad Shopping Centre in Polokwane, Limpopo and one in Witbank, Mpumalanga.

During the chaos, Madonsela took to Twitter saying that, in her view, the Clicks case #BlackHairMatters, is a textbook case of unconscious bias.

“Calling it out is great but anarchy and violence undermine the cause,” she said. Little did she know, the EFF’s Ndlozi was ready to pounce and little did he know, she would have a comeback.

Ndlozi responded harshly to Madonsela’s suggestion that perhaps anarchy and violence was not the answer.

“Find the nearest hell Thuli… when you get there, you know the cerebral thing to do. We need no approval from your coconut logic. Protest is the constitutionally right thing to do when authorities do not punish racism. #BlackLivesMatter and we stop Racism before it kills Blacks!”

Whether Ndlozi was expecting a response from Madonsela, we don’t know but we do know that he got one anyway.

Madonsela, as calm and collected as ever, responded to Ndlozi by saying; “Noted sir. But seriously, shouldn’t it be those that steal from and abuse the poor for personal gain that not only go to hell but get a special place in hell, sir?”

Following her response, Ndlozi lost his cool. He said hell is for the self-righteous who also turn their back against their god-given skin.

“The hottest place in Hell is particularly reserved for false judges! It doesn’t matter with us blacks, your in-laws have already made our lives a living hell,” he said.

‘PROTEST IS THE LANGUAGE OF THE DISEMPOWERED’ – MADONSELA

“Is our constitutional democracy working? Are our parliamentary representatives empowered to use democratic institutions to make a difference? That will be my next article?” she said.

Madonsela then posted a video of different black women speaking about their hair, saying that they don’t need a marketing strategy to determine their beauty.

“This is how young women, using their agency, have chosen to tackle the Clicks BlackHairMatter. I read their action as a call to Clicks and others to examine their perceptions of black hair and black women’s beauty. I consider the action to be epic leadership and cerebral,” she said.