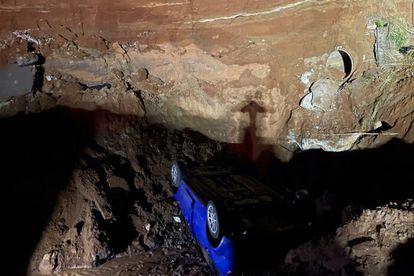 A family suffered serious injuries after its car plunged down a gaping hole on the M4. Photo: Medi Response

A family suffered serious injuries after its car plunged down a gaping hole on the M4. Photo: Medi Response

Four people were injured after a vehicle they were travelling in plunged down a gaping hole on the M4 near Desainagar outside Durban.

The M4 was washed away during the April floods in KZN that the province is still trying to recover from.

FOUR INJURED AFTER VEHICLE FALLS INTO GAPING HOLE NEAR DESAINNAGER

According to Medi Response paramedics, on arrival of paramedics, it was established that a vehicle, driven by a family not familiar with recent events in the area, was travelling on the road, and plunged down a gaping hole where the M4 had been washed away near Desainagar.

Members of the Community Emergency Response Team (CERT) were also reportedly quick to arrive on scene and managed to free four people from the vehicle, which had landed on its roof.

“Two persons (daughters) sustained critical injuries whilst a further two (parents) were moderately injured. The injured were transported to nearby medical facilities.”

The family was following a GPS and did not realise that the road was closed until it was too late.

Three people died and seven were injured in a vehicle collision between a Fortuner and a bakkie on the N1, in the Bylsteel area, north of Polokwane. The accident took place on Saturday.

ER24 spokesperson, Ross Campbell said paramedics arrived on the scene to find that five patients from the bakkie had already been transported with minor injuries by another EMS to hospital.

“The driver from the bakkie was still on-scene but declined transportation. Six patients from the Fortuner, which was found off the side of the road, were still on-scene.”

One female and one male, both believed to be between the ages of 40 and 50, were found on the ground behind the vehicle.