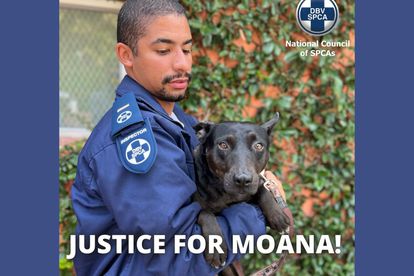 Moana has made a full recovery following the incident. Photo: Facebook/NSPCA

Moana has made a full recovery following the incident. Photo: Facebook/NSPCA

Mojalesa Mofokeng was sentenced to eight years of direct imprisonment for bestiality after raping his neighbour’s 11-month-old dog, Moana, in November 2020.

According to the National Council of SPCAs (NSPCA), Mofokeng was seen naked in Soweto near the dog’s kennel by a tenant living on the property in the early hours of 21 November 2020.

“Having been caught with his pants literally down, he was then apprehended by members of the community,” said the animal rights organisation.

When the NSPCA arrived at the scene it found that the dog had been severely violated and was in need of veterinary attention.

Dr Bryce Marock, the Council’s vet, confirmed that Moana had been inhumanely restrained and her injuries were consistent with rape.

Mofokeng was arrested and eventually granted bail. However, he failed to show up for court and was rearrested.

The original witness of the act was also absent from the case and the testimony of Dr Marock and Inspector Shiven Bodasing played a pivotal role in the sentence.

Magistrate E van Niekerk of the Regional Court presided over the matter and said, in his judgement, that a distinction between the rape of an animal and that of a human should not be made.

According to the NSPCA, Mofokeng’s eight-year sentence is the highest direct imprisonment sentence ever imposed for animal cruelty in Africa.

“The NSPCA winning this case is of extreme significance. We hope that other bestiality cases being heard across the country will follow suit as a precedent has been set, and that animal rapists have been thoroughly cautioned of the consequences,” said Marcele Meredith, NSPCA executive director.