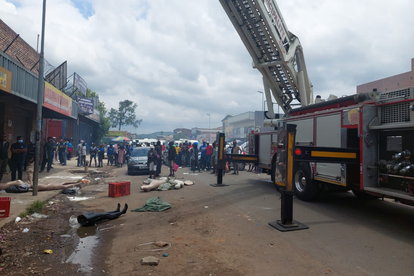 Footage of the fire prompted fears of looting in the KZN city. Image: Twitter / @shym786

Footage of the fire prompted fears of looting in the KZN city. Image: Twitter / @shym786

Rumours of looting in Pietermaritzburg, accompanied by alarming footage, surfaced on social media on Tuesday. However, it has since emerged that there is no unrest in the KwaZulu-Natal city. Reports instead indicate that a fire had ignited the panic.

Cause of fire unconfirmed

Videos of the scene captured two shops that were gutted by a blaze on the corner of Hoosen Hafejee and James street.

The fire had allegedly started at a clothing store before spreading to nearby shops. Reports indicate that the fire had started following a robbery at the store. However, this remains unconfirmed.

A man caught in the fire has allegedly died after allegedly being trapped inside of the store.Unfortunately, Paramedics and other responders on the scene were apparently unable to free the man from the fire.

An incident report from Mi7 National Group’s Emergency Medical Services, who attended the scene, confirmed that the building had caught alight.

“Mi7 medics found a number of security service providers on scene controlling the crowd while firefighters worked to extinguish the blaze that had engulfed multiple shop premises.”

Furthermore, it appears as if more than one individual was found inside of the clothing outlet. In line with this, the report indicated that two people had been trapped inside of the burning building.

“An operation was conducted by firefighters to rescue two people believed to be stuck inside one of the buildings engulfed by the fire.”

The other person, an unidentified female, had managed to escape the harrowing ordeal unscathed. Unfortunately, the victim had been declared deceased on the scene by responders.

“One female was found uninjured while the second person, a male, was extricated but was found with no signs of life. Mi7 medics declared the man deceased on scene.”

Additionally, Motorists in the area were warned that Pietermaritz Street between Retief and East Street is closed to traffic.