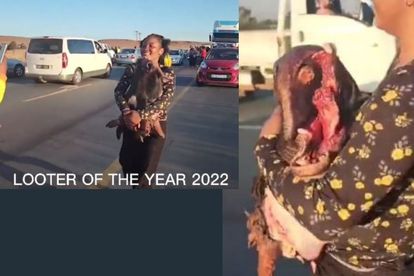 A woman has been given the title of ‘Looter of the year 2022’ after she was seen running with a severed cow’s head from a truck that was involved in an accident.

THE WOMAN WAS FILMED ON THE SCENE OF ACCIDENT IN LIMPOPO

According to a report, the accident happened on the N4 when a truck transporting cow heads was involved in an accident. It is reported no one was hurt.

Yes, this is only something you will see in SA!

A traffic officer running next to the woman filming the whole spectacle is also seen in the video.

While officials are still trying to determine where this happened, social media users had a field day with the video.

Some say the woman has got her priorities sorted. She was clearly in the middle of a hair appointment when she heard about the accident and ran.

According to Magezi Baloyi the incident that happened in Limpopo, outside Malamulele where a truck allegedly derailed.

“The Villagers helped him back to the road & didn’t loot anything. Huge difference between ethics /morality and criminal mindset under the pretext of poverty and unemployment!”.

Last year, looters made off with beer while people lay dead on the N2 after a multi-vehicle accident in KwaZulu-Natal on Saturday.

LOOTERS TOOK OVER THE SCENE AND MADE OF WITH BEER

The accident happened on the N2 between Stanger and Zinkwazi, where multiple vehicles were involved in a collision, including a beer truck.

Emergency services were hampered on Saturday in managing the scene by looters who were ridding the truck of its cargo.