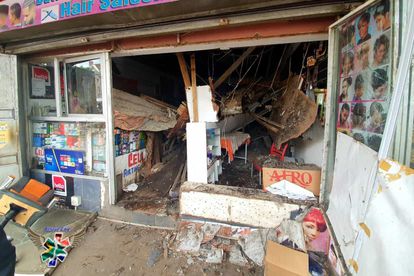 A Three-year-old among fourteen others were rescued from a building that collapsed in Durban on 7 November 2019 around 12:00 / Image via: Garrith Jamieson

A Three-year-old among fourteen others were rescued from a building that collapsed in Durban on 7 November 2019 around 12:00 / Image via: Garrith Jamieson

A three-year-old child, among fourteen other people have been rescued from the rubble and transported to various hospitals in Durban after a hair salon on West Street collapsed on Thursday 7 November 2019, around 12:00.

According to Garrith Jamieson from Rescue Care Paramedics, members of the public were rescuing people out of the building and from the rubble.

“There was an apartment above the hair salon that had fallen below,” said Jamieson.

Jamieson told the SouthAfrican.com that there was a total of ten to fifteen people, including a three-year-old child that was treated and stabilised on the scene and then taken to various hospitals for any further care they required.

The people and three-year-old that were rescued sustained minor to moderate injuries.

An expert South African Police Service (SAPS) search and rescue dog was brought onto the scene just to confirm that there were no other casualties unaccounted for.

Update on the structural collapse

Jamieson says at this stage, there is nobody else believed to be in the building, however, sniffer dogs are being used to make 100% sure.

“They have been given the all clear. The SAPS investigation team is also on the scene and will be investigating further,” said Jamieson.

Teams on the scene included:

The scene was cordoned off and is currently affecting the traffic. “Most of West Street has been closed for emergency vehicles.”

The Department of Public Works in Durban, ordered an investigation into what caused the floor of one of its buildings to cave in mid October 2019.

The incident happened before a human settlements department tender briefing for a large group of contractors.

Department spokesperson, Kiru Naidoo told TimesLIVE that a small section of the wooden floor gave way in an old lecture hall, in a prefab building within the public works complex, in Mayville.

He said no injuries were reported and the building was used “infrequently.”