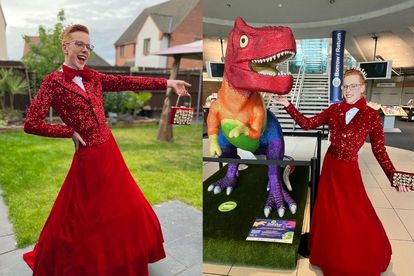 A 16-year-old schoolboy instantly became famous this week his mother shared photos of him dressed in a red sequined dress for his prom.

THE SCHOOLBOY STUNNED EVERYONE IN HIS RED SEQUINED DRESS

Proud mum Nina Green posted the pics of her son Korben on her Twitter:

“At age 12 my son announced he wanted to go to his school #prom in a gown. Four years later we made it happen. I’m so incredibly #proud of him for being true to himself & the reception he got from his whole school was incredible. What do you think @michellevisage @theebillyporter”

LOOK AT THE PHOTOS:

His mother told the media when Korban turned up with friends for the prom. Other pupils gave him a resounding cheer when he emerged from their car.

“As soon as he got out of the car, everyone just cheered, and I was crying. Some of the teachers were crying because he was being who he wanted to be.”

Nina said the response she received on social media after posting the photos has been overwhelming.

RESPONSES TO HIS PHOTOS HAVE BEEN OVERWHELMING

“Everyone has been very supportive, and his year group has been incredible.”

According to a report by Queerty, Korben already had his own drag persona, named Miss Frou Frou, and tweets under that name.

Nina said that for prom, he didn’t want to go in full drag, but just as himself. He was inspired by a hero of his: Billy Porter.

Since the post went viral, Korben and his mom have done several TV interviews in the UK, and they’ve both been blown away by the supportive comments they’ve received.