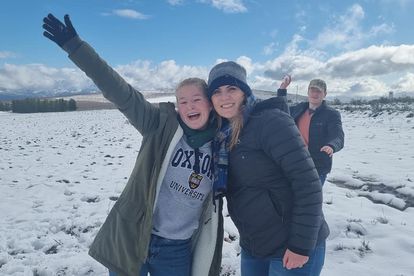 The intense cold front has definitely made landfall, and several parts of South Africa have been turned into a winter wonderland on Saturday.

Look at these photos and videos:

Widespread snowfall was seen over the Cape provinces on Friday, 27 August, and it is expected that the snowy conditions will spread to KwaZulu-Natal and Lesotho on Saturday.

The South African Weather Service said disruptive snowfalls of between 5 to 10 centimetres are expected to fall from Friday onwards over the high-altitude areas of the Western Cape and the areas of the same elevation in the western and southern parts of the Northern Cape.

The SAWS did warn that this weather system would be disruptive as several roads have been affected:

SEVERAL WEATHER WARNINGS HAVE BEEN ISSUED BY THE SAWS:

ALSO READ: Snow, rain, and cold are expected for KwaZulu-Natal this weekend