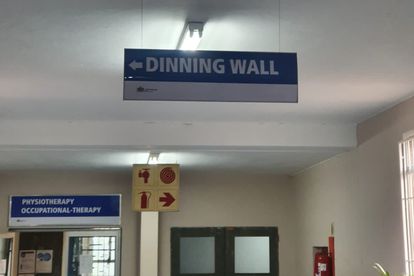 The signs had been taken down shortly after these photos were uploaded online – but questions remain about shoddy workmanship -Photo: Jack Bloom / Twitter

The signs had been taken down shortly after these photos were uploaded online – but questions remain about shoddy workmanship -Photo: Jack Bloom / Twitter

Helen Joseph Hospital in Gauteng has become the target of relentless jibes this week, after several incorrect spellings on signs at the facility were posted online. Some of the terms are so badly misspelt, that identifying the actual department becomes a genuine challenge.

Jack Bloom is the Shadow Health MEC for Gauteng. He was informed of the basic errors earlier in the week, and shared them to his Twitter account. The politician described the spellings as ‘atrocious’, and demanded a response from the hospital.

Here are the offending signs…

‘Palliance Care’, instead of Palliative Care

‘Dinning Wall’, instead of Dining Hall

‘Anaestheasia’, instead of Anaesthesia (that is a tough one, though…)

Helen Joseph Hospital has since responded to the criticism, confirming that the signs with laughably-bad spellings have since been removed. They revealed that the images shared by Mr. Bloom ‘were a few weeks old’, and action was taken immediately.

“We can confirm that the incorrect signage was put up a few weeks ago. This was immediately corrected, after the errors were identified. We have uploaded images to our social media, confirming that updated signs have been installed”

However, the DA representative isn’t satisfied with this outcome. Bloom wants to take things further, and find out who exactly profited from doing such a hap-hazard job. He fears that Helen Joseph may have fallen victim to the type of corruption that has plagued Tembisa Hospital.

“We need to know what fishy company got the contract for this sign, why they were so incompetent and what they were paid for it. Is this another corrupt institution like Tembisa Hospital, which grossly overpaid for items such as skinny jeans and luxury armchairs?”

“I am determined to get to the bottom of this matter. There is far too much abuse of hospital money while patients suffer because of poor care. We need to know what company did the signage, how much was paid to them, and if there will be any consequences.” | Jack Bloom