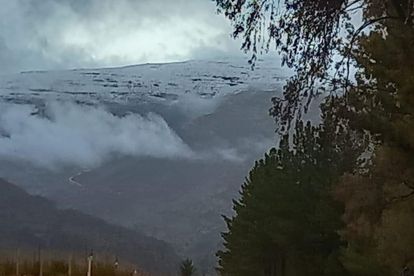 The Matroosberg Private Nature Reserve, which is located on the Erfdeel farm approximately two hours outside of Cape Town, shared an image of the first snow of the season on the mountain.

In winter, the Matroosberg is often a winter wonderland but the reserve encouraged snow lovers to hold off on visiting until the next snowfall.

The Matroosberg Reserve shared an image of snow at the top of the frigid mountain on Friday, 21 May. “Not really worth the drive, as it’s the first snow of the season and is expected to melt fast,” said the Reserve.

However, snow lovers were promised the trip would soon be worth their while because the Reserve said “Things will get better from the next snowfall onwards.” During the winter months, after prolonged flurries, the southern slopes of the Matroosberg retain the white blanket for quite some time, which allows visitors to drive up to the snow and frolic.

On Thursday, the Reserve said it was not expecting any heavy snow or any ground-level snow, which reaches the reception, any time soon.

Earlier this week, on Tuesday, 18 May, the South African Weather Service (SAWS) issued a weather warning, which said that two cold fronts are expected to hit the Western Cape from Thursday onwards before moving over the southern parts of the country.

The second cold front, which made landfall on Friday, was predicted to cause “rainfall and light snowfall to persist over the Western Cape.”

“Cold conditions will start to invade the central parts of the country during Friday with maximum temparatures dropping significantly to the mid-teens,” said SAWS. The conditions are expected to stretch all the way to KwaZulu-Natal, Mpumalanga and Gauteng over the course of the weekend.