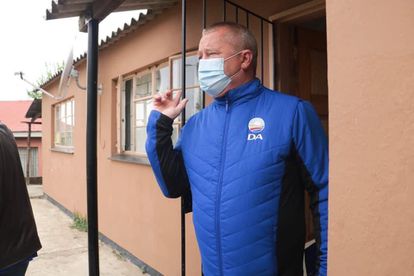 DA KwaZulu-Natal provincial leader Francois Rodgers visited residents who have been waiting for seven years for the government to replace the asbestos roofs on their homes.

DA KwaZulu-Natal provincial leader Francois Rodgers visited residents who have been waiting for seven years for the government to replace the asbestos roofs on their homes.

The Democratic Alliance has highlighted the problem of asbestos roofs in houses in the Colita and Forderville suburbs of Estcourt which it says has finally led to the government taking action to replace them ahead of the upcoming elections.

“The DA is pleased that the DA initiative to address the failure of the ANC government to replace the asbestos roofs in the Colita and Forderville suburbs of Estcourt seems to have galvanised the ANC into action,” Member of Parliament Alf Lees said.

However, the DA was not happy when an ANC vehicle with a load hailer interrupted a meeting the party was having to discuss the asbestos problem with residents ahead of the elections.

He said DA Inkosi Langalibalele ward 10 candidate, Patience Kok, would be monitoring whether the ANC replaced the asbestos roofs or whether the move was an “election gimmick” that would leave the residents of asbestos roof houses in the lurch as it had done for the past seven years.

“In order to protect the lives of persons living in low-cost houses which had asbestos roofs the decision was made and an agreement entered into in November 2014 that these roofs should be removed and replaced with safe roofing materials. This process went ahead in the Wembezi township but despite funding being approved in February 2016 none of the asbestos roofs of the 352 houses in the Colita (110) and Forderville (242) suburbs of Estcourt have yet been replaced,” Lees said.

“This funding amounted to R36 million and was obviously a very attractive possible source of fraud and corruption. The project then became bogged down by what has seemingly been rent seeking conditions and obstructions imposed by the officials and others of the Inkosi Langalibalele municipality and the Department of Human Settlements,” Lees said.

He said that in desperation the appointed implanting agent, Aaria Consulting (PTY) Ltd had been forced to approach the courts to force the municipality and Department of Human Settlements to provide the funding for the asbestos roofs to be replaced. “The matter now remains in court whilst every minute of every day the residents of the 352 houses in the Colita and Forderville suburbs are exposed to asbestos poisoning which will possibly shorten their lifespans,” Lees said.

“After seven years of inaction on the part of the ANC and its cadre of appointed officials it was astonishing to see the ANC suddenly announce around Colita and Forderville, whilst the DA was in Colita,  that there would be a meeting about the asbestos roofs on the very same day that the DA was visiting some of the affected houses and highlighting the plight of the residents,” Lees said.

He said an ANC municipal bakkie had driven through the suburbs with a loudhailer announcing that there would be a meeting about the asbestos roofs in Forderville.

Lees said the officials “even had the audacity to loudly drive through the crowd” of people who had gathered to attend a public meeting where Rogers had been addressing people regarding the issue.