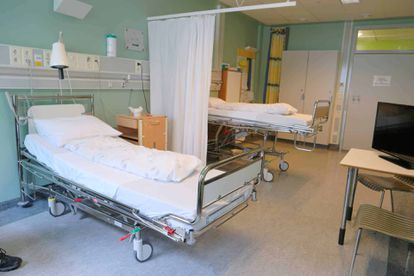 Five men made off with two television sets and a plethora of personal items from staff, security guards and at least one patient waiting to be admitted in what appears to be a lightening opportunistic robbery at Life Westville Hospital.

An unnamed source supposedly on the scene described the situation to the Daily News. They told of a white Toyota Etios pulling up outside the Life Westville Hospital in the early hours of Monday morning.

The robbery began and was over in the space of five minutes as four of the men, reportedly one of them was armed, charged into the reception area, held up the security guards, unhooked two television sets, robbed all staff and patients present of their personal belongings and cash and made a quick exit.

The source claims it was difficult to identify the men because they were wearing hats and hoodies to hide their faces from the security cameras.

The four rejoined the driver, who had remained in the vehicle throughout and they sped off, quite literally, into the sunrise.

Apparently sensing danger, several staff and patients in the reception area prior to the robbery fled as soon as they saw the four men start making their way to the entrance.

Police spokesperson Colonel Thembeka Mbele described a scene of hospital staff going about their days when they were suddenly interrupted by the four men entering the building and have opened a case of robbery at the Westville police station.

“The suspects then entered the hospital building where they remove two TV’s from the wall and robbed the patients of their cellphones and cash,” Mbele said.

No one was hurt

Thankfully no patients or staff were harmed during the incident, although several of the staff members were understandably shaken up at being held up by a firearm.

“An incident of this nature is distressing and counseling has been offered to those affected. The safety and security of our patients, employees, and property are of the utmost priority and we are in discussions with our security company to assess the hospital’s current security measures. Various items such as hospital TVs were stolen,” said Atish Maharaj Life Westville Hospital manager.