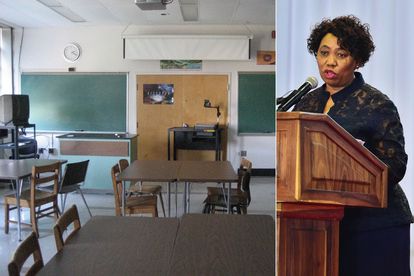 Schools have been asked to accommodate learners from facilities that have been severely affected by the KZN floods. Photo: GCIS and can20 / Flickr

Schools have been asked to accommodate learners from facilities that have been severely affected by the KZN floods. Photo: GCIS and can20 / Flickr

While the extent of damages at their schools is assessed, students from severely impacted institutions can attend classes at neighbouring facilities. During her media briefing about the Basic Education Department’s response to the KZN floods Minister Angie Motshekga said over 100 schools are extensively damaged.

The Minister revealed that the aforementioned schools are inaccessible to learners. Motshekga visited a number of schools in Durban following the floods that caused damage and loss of life.

The Minister shared that the has explored options for schools that have been severely impacted. While remote learning could only be implemented for primary schools, the department was prompted to quickly start reopening schools.

The Department has until Friday, 22 March, to confirm how many learners have been placed and which schools have reopened. Motshekga shared that the MEC informed her about requests for neighbouring schools to accommodate students from impacted facilities.

“We will be able to say by Friday which schools are not able to operate. There are schools that are seriously damaged. The MEC told me they have already requested neighbouring schools to accommodate pupils who are not from those schools,”

She added that on 22 March, a clearer picture will be painted about how many learners are unable to be placed at neighbouring schools. Motshekga said that the Department is also assisting victims with books, uniforms and other items needed for schooling.

KZN Education MEC Kwazi Mshengu estimated that 320,000 learners from 630 schools have been affected by the floods in the province. Mshengu revealed that the department knows that not all schools could be opened.

He explained that around R400 million has been set aside by the department to rebuild and restore infrastructure to ensure schooling continues.

ALSO READ: KZN floods: Online learning may be re-introduced at some schools