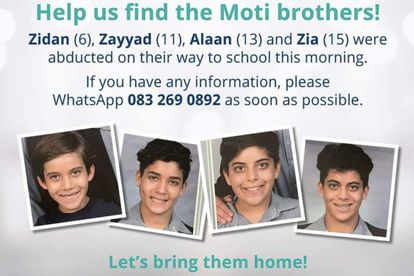 It has been weeks since the four Moti brothers were kidnapped en route to school in Polokwane.

Authorities have made very little information available to the public on whether progress has been made to find the brothers.

THE BROTHERS WERE KIDNAPPED ON THEIR WAY TO SCHOOL LAST MONTH

There have been no new updates from the police.

Zidan, Zayyad, Alaan, and Zia Moti – all aged between 6 -15- were kidnapped on their way to school in Polokwane at approximately 07:00 on Wednesday, 20 October 2021. Seven men with R5 rifles and handguns cornered their vehicle and forcefully removed them.

Police Minister Bheki Cele last week said there was a multi-approach team which includes the Social Development Department and others, roped in to deal with the Moti brothers’ kidnapping case.

“It’s a difficult case, but no doubt we have made progress. There are follow-ups on matters. Up to this point, we are hopeful that the police will crack the case,” he said.

A former leading police hostage negotiator, Manie van der Merwe, has told Sowetan Live that the silence may signal negotiations are at a sensitive stage.

“Silence is crucial. When there is a media blackout on such a high-profile incident, such as this one, it usually means some kind of resolution to the event is close,” said Van der Merwe.

The kidnapping of four siblings, however, was “extraordinary”.

Meanwhile, several prayer sessions have been held by the school and the community.

The police have been mum on any developments in the case and have also asked the media and other stakeholders to treat the matter with the necessary discretion.

Anyone with information that can lead to the freeing of the children and arrest of the criminals can contact Maj Genl Sam Manala, the deputy provincial commissioner responsible for crime detection, via WhatsApp on 082 411 5316.

ALSO READ: What to do if your child is kidnapped in South Africa