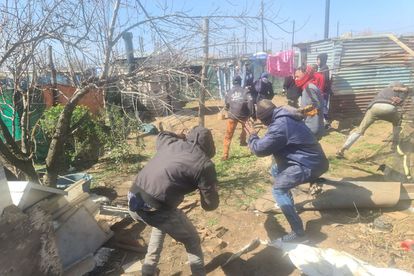 Kagiso residents continue on in their efforts to get rid of zama zamas in their community, reports eNCA. Some residents have even set fire to homes believed to belong to the illegal miners.

The protest efforts of Kagiso residents are a response to the tragic Krugersdorp rapes of last week.

Footage from Scrolla Africa shows a shack in Kagiso burning while two people try to put out the fire with two buckets of water.

It is reported by the same account that the residents are burning the homes allegedly belonging to zama zamas.

Last week, eight women were raped in a devastating incident that occurred in Krugersdorp. Many of the suspects arrested are allegedly zama zamas who mine illegally in the West Rand, according to EWN.

The residents of Kagiso responded to this heinous crime by taking matters into their own hands. For the past few days, unrest and protest has seeped into the area.

The roads leading to Kagiso are blocked with rocks and burning tyres. And at least one known death has occurred.

Taking matters into their own hands

But it is clear that Kagiso residents are not putting their faith in law enforcement, but rather in themselves.

Not only are residents burning homes but they are hunting down areas where the miners are working.

The burning of homes this afternoon is an indication that the frustrations in the community are not slowing down anytime soon.