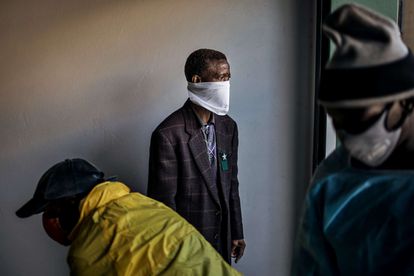 A relative looks at the casket containing the remains of COVID-19 patient loaded in a hearse at the AVBOB mortuary in Soweto, on July 24, 2020. Photo by MARCO LONGARI / AFP

A relative looks at the casket containing the remains of COVID-19 patient loaded in a hearse at the AVBOB mortuary in Soweto, on July 24, 2020. Photo by MARCO LONGARI / AFP

Minister Mkhize announced on Friday that South Africa recorded an increase of 13 944 new cases within the last 24 hours.

According to the daily report, 245 771 citizens have recovered; the recovery rate is currently 58%. Sadly, a further 250 patients have lost the battle since Thursday: 13 from the Eastern Cape, 139 from Gauteng, 50 from KwaZulu Natal, 47 from the Western Cape and one from the Free State.

The confirmed COVID-19 cases per province is as follows:

Ramaphosa said a deliberately cautious approach was taken to keep schools closed while South Africa battles the biggest increase in new infections it has seen to date. He apologised for the inconvenience caused to families who now need to make alternative childcare arrangements.

We ask you to do this because we believe it is important to ensure that schools do not become sites of transmission at a time when infections are rising fast. I want to thank all of our teachers and other staff at schools across the country who have been on the frontline during this pandemic under conditions of great difficulty.

Grade 12 learners and teachers will be on a break during the first week, from 27 to 31 July 2020, while school management teams, Grade 7 learners will return during August. In addition, the 2020 academic year will be extended to 2021. Read more here.

There are currently just over five million active cases. Of those, 5 471 443 patients have a mild condition, while 66 205 cases are critical.

Brazil is still the second-most affected country in the world, followed by India and Russia. South Africa is currently the fifth-worst affected country. Out of the 169 882 active cases, 539 are critical, as per the lastest Worldometer report.