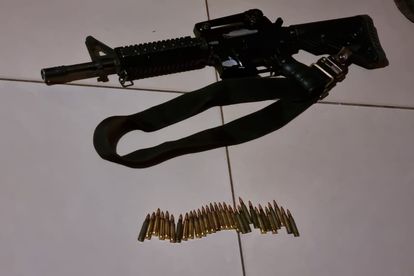 A cash-in-transit robbery suspect was apprehended in Soweto following an intelligence-driven operation by joint units.

CASH-IN-TRANSIT SUSPECT WOKEN UP BY COPS IN SOWETO

Police spokesperson Captain Lloyd Ramovha said an intelligence-driven operation by the Hawks’ Serious Organised Crime Investigation team in concert with metro police and private securities resulted in the arrest of a 41-year-old with possible links to recent cash-in-transit robberies.

“The suspect was arrested in the wee hours of Friday at Orlando East, along Mane Street in Soweto.”

He added: “This was after information was received and swiftly acted upon. On arrival, the premises were penetrated. The suspect was apprehended, and the resultant search of his room uncovered firearms and a variety of ammunition”.

DANGEROUS AND ILLEGAL WEAPONS FOUND IN THE SUSPECT’S PLACE

Captain Ramovha said a dashboard rifle with three magazines filled with about 120 ammunition and a pistol also with ammunition as well as a signal network jamming device were amongst the items seized.

“The suspect is expected to appear in the local court on Monday, 03 October 2022, charged with possession of prohibited firearms and ammunitions,” he confirmed.

Meanwhile in July this year, cops also swooped in on a cash-in-transit gang that had plans to hit another risky big score.

On Thursday, 30 June, the TMPD tactical members with crime intelligence and other law enforcement officers responded to information received about suspects who were planning a cross-pavement robbery.

According to TMPD, the house of the suspects was identified in Atteridgeville. A C-class Mercedes Benz vehicle was seen leaving the house before the team arrived. The officers tactically approached the house and found four suspects. Inside the house, two military signal jammers were recovered, and one firearm and sets of number plates were also recovered.
A Suzuki swift vehicle with tampered VIN numbers was also recovered. They were all charged with conspiracy to commit a cash-in-transit robbery among other charges.

MORE ON THIS: Suspected cash-in-transit robbers nabbed before striking again