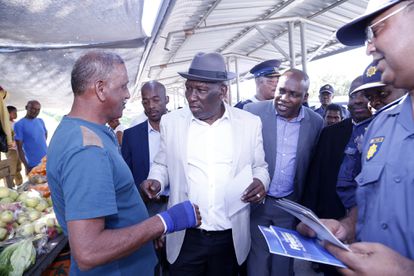 Bheki Cele says 19-year-old victim was lucky to be raped by only one man. Image: GovernmentZA / Flickr

Bheki Cele says 19-year-old victim was lucky to be raped by only one man. Image: GovernmentZA / Flickr

Bheki Cele, Minister of Police, stated that he believes the 19-year-old victim in the tragic Krugersdrop mass rape was lucky to be raped by only one man.

He was quoted in an interview with eNCA. Though his sentiment was that she was not raped by multiple men like the other victims, his choice of language has outraged many in the population.

Cele said the following in the interview:

He spoke referring to the devastating events in Krugersdorp. A film crew was shooting in an abandoned mine dump when their film site was intruded and robbed.

Eight women were raped by multiple men in the ordeal. It is an event that has shocked the nation, particularly due to its proximity to August as Women’s Month.

It also highlights the severity of gender-based violence within South Africa. Thus far, EWN reports that 82 people have been arrested with a trial scheduled to begin on Monday.

“What happened in Krugersdorp is just the shame of the nation.” Cele said in a recent press interview, quoted from TimesLive.

No one is lucky to be raped

In light of the sensitive nature of these crimes, Cele’s comments are tactless. South African women, living in the world’s femicide capital, are well-acquainted with the trauma of living in such a violent society.

Implying that someone is lucky to have only been raped by one man only speaks to the levels of violence that permeate our society.

The 19-year-old victim will likely face a lifetime of trauma and healing due to her rape, as will the other women who were victims of these crimes.

Cele, being the Minister of Police, should have known not to speak in a way that might make these women compare their trauma to one another.