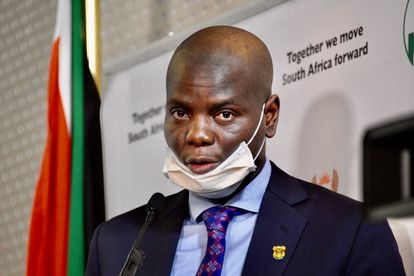 Justice and Correctional Services Minister Ronald Lamola has confirmed that no ringleaders have been arrested in connection with the widespread July riots.

On Thursday, the Minister made it clear that he still harbours a strong desire to see those responsible for the unrest punished.

Lamola told the South African Human Rights Commission hearing that he was concerned the masterminds behind the violence remain at large. Despite these concerns, the Minister is adamant that he can’t tell the SA Police Service or the National Prosecuting Authority how to do their work.

“It does concern me, but it can only end there. I cannot instruct the NPA and police who and how they must arrest. Hopefully, with the information at their disposal, they, at some stage, will be able to arrest the mastermind behind the unrest.

Lamola: Critical that ringleaders are arrested

The Minister highlighted his perception that it is critically important for those responsible for the riots to be held accountable.

“It is important that they get arrested and send a message that no one is above the law and that there is no holy cow. People must be held accountable, and justice must prevail for those who has been murdered and the destruction of property,”

Furthermore, the Minister called for justice for the 36 victims who lost their lives during the violence in Phoenix, KwaZulu-Natal.

“Justice must prevail for such victims in a manner that it restores their dignity as before the crimes were committed. Unfortunately, the scars are too deep because some lost their family, some have lost friends and some have been heavily injured in a manner that they can’t go back to work. The loss of dignity is a huge irreparable harm.

With over 300 South Africans dying during the unrest and R50 billion in damage done to the economy, Lamola says the ordeal should not have taken place.

“What happened to the victims should have never happened in any democratic country or democratic society,”