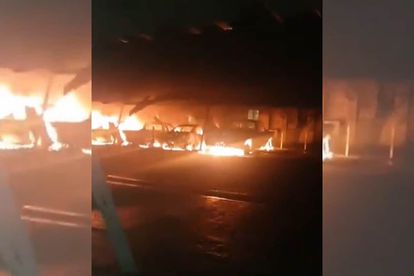 The town of Ladysmith in KwaZulu-Natal (KZN) continues to burn, with attacks on trucks during the week followed up with the setting alight of six out of seven cars at the town’s Social Development offices.

Protests have been ongoing in Ladysmith since February, with  incensed residents calling for the head of fraud and corruption accused Alfred Duma local municipality mayor Vincent Madlala, as well as bemoaning poor service delivery, water shortages and escalating violence between warring taxi associations.

The Department of Social Development vehicles were torched on Wednesday evening, and although there is currently no leads on who the culprits are, eNCA report that evidence points to a petrol bomb attack.

Roads going in and out of town have been barricaded with the carcasses of burnt-out trucks and minibus taxis that continue to enforce a total shutdown in the area. KZN Premier Sihle Zikalala decried the loss of nearly R2 million a day with businesses, factories and transport operators rendered utterly unable to function amid the chaos.

KZN MEC Nonhlanhla Khoza has called for the perpetrators of the attack on the government vehicles to be swiftly brought to justice.

“The department has received a report and seen pictures with its six vehicles burnt by brazen criminals,” said Khoza.

“We are shocked at this despicable act of vandalism, which is totally abhorrent, destructive and beyond any justification whatsoever.”

“These vehicles are an important tool used to quickly respond and provide services to our needy communities,” she said.

She said that the crime was just another in a long line of threatening acts committed against government employees in the area.

“The torching of our vehicles is another form of threatening employees who have suffered a lot of hijackings in the past.”

“The law must take its course wherever and whenever our properties are under threat. We urge police to investigate such criminal activities without fear or favour. No-one should do these despicable and morally reprehensible acts, despite any frustration,” she said.

Police are investigating the matter.