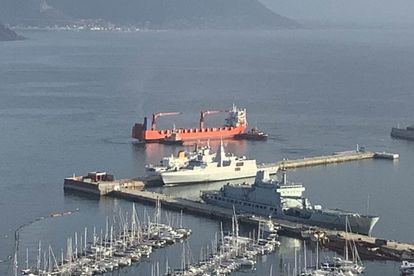 Since the ship’s arrival, the Department of Defence and Military Affairs has been peppered with questions from the media and political parties alike.

Lady R allegedly switched off its Automatic Identification Systems (AIS), which provides positioning and identification information to other ships and coastal authorities when it arrived. There are reports that it was still off when the vessel left on Friday.

“The vessel should have docked at Table Bay harbour just like other commercial vessels. Instead, it was allowed to dock at Simon’s Town Naval base, which, because it is the largest base in the country, is a national key point,” said Kobus Marais, the Democratic Alliance Shadow Minister of Defence and Military Affairs.

“Evidence suggests that over the last two nights, there was unusual activity in the harbour with on-board cranes offloading cargo from the Russian commercial vessel onto trucks. There was also movement by said trucks transporting containers in and out of the naval base.

“These trucks were protected by armed personnel. While trucks transporting containers are not uncommon, it is, however, very unusual for such activities to take place at night,” said the DA MP.

Lady R is en route to the Port of Dar es Salaam in Tanzania. Initially, it was thought the vessel docked at Simon’s Town because it was in distress. However, the South African Maritime Safety Authority (SAMSA) ruled this out and said no distress signal was received.

According to reports, Lady R already sailed past Cape Agulhas on 5 December per maritime monitoring websites, which means it turned around and went back to Simon’s Town.

Tugboats towed the cargo ship out of the harbour at approximately 6:00 on Friday. By 8:00, it was heading past Cape Point, according to Daily Maverick.

David Feldmann, the US Embassy spokesperson, told News24 that the US Consulate in Pretoria previously warned that entities supporting Lady R could run afoul of American sanctions.

“We had indicated the vessel was sanctioned under US law because the ship is part of Russia’s military export-import business and had cautioned that entities supporting the vessel could run afoul of US sanctions,” he said.

The DA said the behaviour of Lady R worried Simon’s Town residents because it is sanctioned by the US and European Union over the Russian invasion of Ukraine.

“Given the ANC government’s history with Russia, the minister needs to come clean and explain what is going on and why this commercial vessel which is sanctioned by the US and European Union, was allowed to dock at Simons Town.

“What is the minister hiding and why is it shrouded in secrecy? The minister and the chief of SANDF have a responsibility to tell South Africans what is going on,” said Marais.