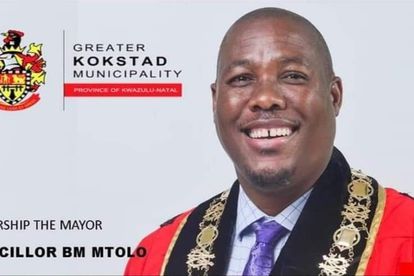 Kokstad mayor Bheki Mtolo has resigned from his top seat as well as a councillor, effective from month end.

The mayor, who runs the Greater Kokstad Municipality in KwaZulu-Natal (KZN), says he leaves the position with mixed emotions since joining the municipal political leadership in May 2011.

KOKSTAD MAYOR STEPS DOWN TO FOCUS ON ANC

Mtolo tendered his resignation on Monday in a letter to the Speaker of the Greater Kokstad Municipality.

His resignation comes after his election as Provincial Secretary of the ANC in KwaZulu-Natal on 22 July. According to the party’s constitution, such a position is a full-time position.

“This, therefore, means I am unable to remain both as a councillor deployed by the ANC and elected by the masses of our people as such, same as Mayor leading the local executive, I must vacate office,” he said.

This means he will also vacate both positions as councillor and mayor, effective from 31 August at midnight, he said.

Mtolo expressed mixed feelings for his departure since he joined the Greater Kokstad Municipal political leadership since May 2011 as Deputy Mayor.

He returned in 2016 as the Mayor and got re-elected as Mayor in the local government elections in November 2021.

This journey, he says, has been of hardship and a commitment to serve people selflessly while being guided by the principles and visions of the ANC.

“We carry these values and principles because of our profound conviction that South Africa belongs to all who live in it. Our occupation of these positions is nothing more other than to uplift the quality of life of all our people, especially the poor, the rural masses, women and children.”

He expressed his greatest honour for the opportunity to serve Kokstad in both the political and administrative arms.

“We have demonstrated that it is indeed possible to make local government work, functional and stable. I leave with my head held high, if not highest, because I leave behind one of the greatest institutions that demonstrated local government excellency, stability and service delivery orientated.”

Since his election as ANC KZN’s secretary general, Mtolo has been pushing against the party’s step-aside resolution.

He told News24 that ANC’s policies are not the Bible and can be amended. The idea that the step-aside resolution is untouchable was a fallacy.

“The policies that are there are not the Bible. The only documents I know that have never had a conference to be amended are the Bible and the Quran. You cannot amend those. But any policy and the Constitution can be amended by anyone,” he said.